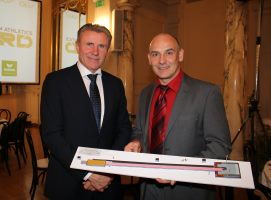 World Athletics Vice President and pole vault legend Sergey Bubka congratulated CEO Armin Margreiter personally with his mobile Athletics initiative when he presented him in the Vienna Award" Austrian track and Ambassador of the Year 2014 ". 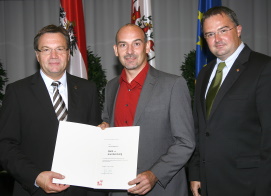 from Governor Günther Platter for many years of service in the office of the Tyrolean provincial government / department Sports.

Through it`s worldwide network of top athlete and manager contacts, Golden Fly Sports GmbH is the place where the most successful athletes in the world can be placed and committed to events.

"Armin Margreiter and his team do an excellent job for the promotion of athletics – it’s a great concept, especially the Golden Roof Challenge in Innsbruck. As long as all the IAAF requirements are met – which is the case with the Golden Fly Series – the events are fully-fledged athletic competitions and enrich the IAAF competition calendar. We need such events to showcase the appeal of athletics in a modern, audience-grabbing light!"

“I am very happy to have the opportunity to give my opinion about your competition-series! I felt very excited and motivated in the several Golden Fly Series events on “The FlySwat”. I could show my jumps for the crowd and it was great to feel the good atmosphere, especially with the people very close to the track and a good organization. I am convinced you can continue with this kind of meeting and I would like to come back again!“

“During the last year, I competed in several events of the Golden Fly Series. It is about big meets which provide a great experience for each competitor. For me personally, is always pleasure to compete with elite world class athletes in front of emotional and very warm audiences, in different cities every time and on the largest mobile track and field apparatus of the world - “The FlySwat”. Additionally, from an athlete's point of view, it is very important to have high standards in order to achieve big performances. You have done that! At this point, I want to thank the organizers and, of course, everybody who contributed to organizing those meets. I'm looking forward to be with you also next season and why not, at all the events of the Series. Good luck with your work and I wish all the best.” 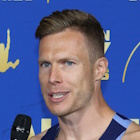 "Exactly such concepts as the "Golden Fly Series" needs Athletics ... exciting competitions in a great setting combined with the most professional organization! For us, athletes, it´s always a highlight so close to the audience, because this guarantees the very special atmosphere of the Golden Fly Series. I am also happy to be here in 2015 and am already looking forward to exciting duels with top international athletes!"

"I've been in Innsbruck, for the start of the Golden Fly Series. It was an excellent competition with lots of atmosphere and a unique interaction with the audience, which transmits pure energy and shivers to the athletes! It was a perfectly organised competition with an all star cast, which promotes top performances and guarantees excellent visibility!”

"The Golden Fly Series was a very exiting experience for me and the atmosphere so close to thousands of enthusiastic fans was new and unique. It was a real pleasure to jump as the mobile apparatus of the series "The FlySwat" allows really big jumps as well!  So I`m glad that I was part of this great initiative bringing athletics directly to the people and look forward in further jumps in the next years!"

“The Golden Fly Series offers a highly energetic atmosphere that combines sport and entertainment. The Golden Fly Series management team does an excellent job of organizing events that provide opportunity for athletes and a great show for all spectators who attend.”
Jeff Hartwig set at the Int. Golden Roof Challenge 2008 in Innsbruck/Austria a new world record at the age of 40 years (5.60 )!

“Two years ago, Munich was one of the first cities to welcome the largest mobile Athletics jump facility to host an international, world-class jump meeting. The "Fly Swat" makes it possible to stage Athletics competitions outside a stadium skillfully and close up to the people. At the Golden Fly Series, everything is always in accordance with the highest international competition standards. The combination of a high-profile European City within an international competition series is an important step for the successful future of track and field events. Once again in 2014 the Jump & Fly Munich will be part of the Golden Fly Series."

“The Austrian Athletics Federation (ÖLV) welcomes and fully supports the Golden Fly Series, launched by Tyrolean Armin Margreiter and his highly professional team in Innsbruck. This mobile Athletics Series, performed in city centres on the world’s largest mobile Athletics apparatus "The FlySwat ™" is a great initiative, which proves that even small Athletics destinations can give new impetus to the development and growth of our fascinating sport attracting wide media coverage. For his tireless and courageous efforts in the sense of modern athletics Golden Fly Series operations CEO Armin Margreiter in March this year received the title "Austrian Athletics Ambassador of the Year 2014" from our Federation.”